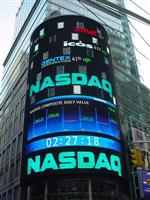 Nasdaq OMX Group Inc plans to pay out $62 million in cash to firms that lost money in the bungled Facebook Inc initial public offering in May, modifying an earlier plan that drew intense criticism from market makers and other exchanges.

The fund, which Nasdaq said on Friday it would file with regulators, is $22 million larger than originally proposed in June. All accommodations will be paid in cash, a departure from the prior plan in which Nasdaq would have mostly compensated firms through trading credits or rebates.
All payouts are expected to occur within six months.
Market makers lost upward of $200 million due to technical glitches on the IPO when Nasdaq’s systems could not handle the massive amount of orders and cancellations ahead of the IPO.
The market makers, which facilitate trades for brokers ensuring smooth market operations, said Nasdaq’s original plan fell far short. Some said they were considering legal action.
The original plan also drew the ire of other exchanges, which said the trading credits would force the firms to trade on Nasdaq.
NYSE Euronext and BATS Global Markets on Friday declined to comment on the new proposal.
The botched IPO has been a communications nightmare for Nasdaq, which prides itself on its technology.
It is also a black eye for an exchange industry already suffering from lost investor confidence after both the financial crisis and the "flash crash" in May 2010, when $1 trillion in shareholder equity was temporarily wiped out in minutes.
"We deeply regret the problems encountered during the initial public offering of Facebook," Nasdaq CEO Robert Greifeld said in a statement. "We failed to meet our own high standards based on our long history of providing outstanding technology to our members and exchange customers."
Greifeld said the exchange has learned from the experience and will continue improving its trading platform.
The Financial Industry Regulatory Authority, Wall Street’s self-regulator, has agreed to evaluate claims submitted under the program. The filing of the accommodation program with the SEC begins a comment period, Nasdaq said.
Facebook’s $16 billion IPO was to have been the culmination of years of breakneck growth for a social network that became a cultural and business phenomenon. But the shares of the eight-year-old company founded by Mark Zuckerberg in his Harvard dormitory room have sagged since going public at $38 a share.
Facebook shares fell 0.8 percent on Friday to close at $28.76.
Nasdaq’s four largest market makers in the $16 billion Facebook IPO — UBS, Knight Capital Group, Citadel Securities, and Citigroup’s Automated Trading Desk — have estimated that they lost $200 million from Facebook trades entered May 18.
In addition, news reports have said UBS may have lost considerably more, perhaps $350 million.
Citadel said it had no comment on the new plan, while the other market makers were not immediately available for comment. Nasdaq announced the filing late on Friday.
The losses were caused at least in part by Nasdaq technical problems and a communications breakdown that prevented market makers from knowing for hours if their orders had gone through. Some orders were lost altogether.
Knight Capital and UBS have hinted that they could bring legal action against Nasdaq if the compensation does not cover their losses.
Source: Reuters
(Reporting by Rick Rothacker, John McCrank, Karey Wutkowski and Herb Lash; Editing by Bernard Orr, Andre Grenon, Gary Hill)
Rate this post