The simplest moving averages can be transformed into a new tool – envelopes of moving averages. This tool, like the Bollinger Bands, is used to determine the boundaries of the current price movement.

The indicator consists of three bands: 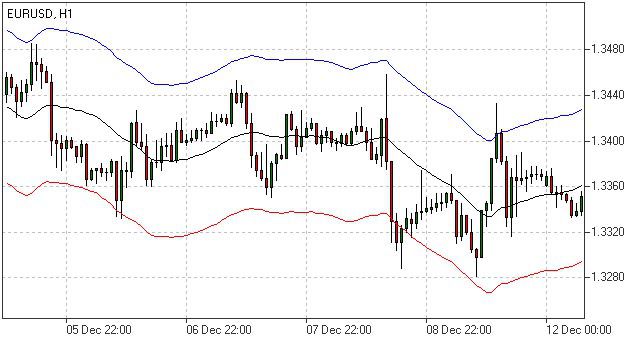 The envelopes moving averages (Moving Average Envelopes) consist of two moving average (which may be considered as a simple exponential or on a different principle), displaced one up and the other down by a percentage (called envelope coefficient).

Sometimes we draw the third line – the central sliding from which there is a shift.

For example, a 2% envelope of moving averages will look like 2 lines, the first one – sliding shifted by 2% up, the second – 2% down. It is believed that the envelope defines the boundaries (upper and lower) of the normal price fluctuation of the currency pair.

The greater the volatility of the analyzed market, the more the boundaries of the bands need to be selected.

How to use Moving Average Envelopes

There are a number of methods for using envelopes:

As in the case of determining the parameters of a normal moving average, a trader becomes preoccupied with a dilemma – either to receive more false unprofitable inputs or to skip a part of the trend.

The first tactic is used mainly for short-term trading, the second – for medium and long-term.