Weights can be chosen in different ways, for example, in the case of a linearly weighted moving average:
Wi = | in-1 | – the weight of the moving average is selected so that the latest prices have the maximum weight, and the longest ones – the minimum.

For example, for a linearly weighted moving average with period 5, the formula will look like this:

A linearly-suspended moving average with a period of 14 is as follows: 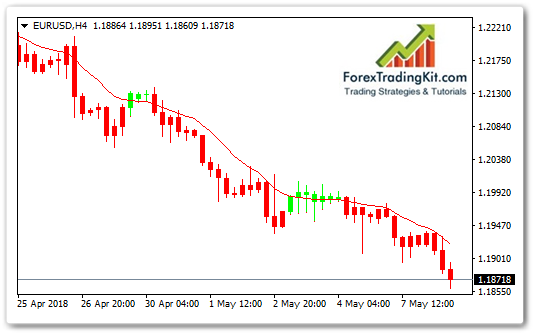 The delay at the entrance to the trend and at the exit from the trend is usually significant, but less than the simple sliding, because thanks to giving the latter prices of large scales, it reacts faster to price changes.

Like a simple sliding in the outset (trading range), the weighted one gives a lot of false signals and leads to losses.

When entering the price calculation, which is different from the price level in the market, the weighted moving average changes stronger than usual, since the last price is given the largest weight, however, when this price leaves the sliding one, a secondary false signal is not given.